Mr. DeDominicis earned his Bachelor of Music in Vocal Performance and three years of Music Education Studies from Anna Maria College. A 2005 member of Who’s Who among Colleges and Universities, Anthony has studied under Mary Lynn Ritchey, Peter Hart and Maureen Connors. While attending college, Mr. DeDominicis assistant conducted the college choir and served as president of the Chamber choir. He was a section leader and soloist at South Congregational First Baptist Church under the direction of Richard Coffey, from 2007-2016. In his time there Mr. DeDominicis also directed a children’s choir. His full time work consists of teaching vocal and piano private lessons at Summit Studios in Manchester Connecticut. This is Anthony’s Sixth season singing with CONCORA; Connecticut’s Premier Professional Chorus. Not only does Mr. DeDominicis perform he also directs ‘Simply Sonority’, a women’s vocal chamber choir in their sixth season. Singing jazz standards with his grandfather’s band are just some of the leisure he partakes in for enjoyment. From 2010 till 2012 he was a member of the Hartford Chorale. Anthony will eventually be starting his Master’s Degree in Choral Conducting. As a music educator, advocation for vocal health is a priority for all of his students. His family, fiancé, and spending time outdoors are the most important parts of his life that keep his soul fulfilled.

Mezzo-Soprano Genevieve Clements has been an active performer since the age of 4. Throughout her childhood, Genny played the piano, baritone horn, and sang in local choirs and musical theatre productions, often receiving solos and leads. When it came time to decide on plans after high school, she decided to study classical voice at the Hartt School at the University of Hartford in West Hartford, CT. During her four years at Hartt, Genny studied voice with Cherie Caluda and Kyle Swann and performed with Hartt Opera Theatre.

During the fall of her junior year, Genny continued her studies in Milan, Italy, and performed with professional choirs in the area. While in Milan, she also realized her love of 20thand 21st Century music for the voice, especially contemporary opera and chamber music. Since graduating summa cum laude with her Bachelor of Music in Classical Vocal Performance, Genny has developed her proficiency and passion for teaching both voice and piano to aspiring musicians of all ages and skill levels. She loves helping people make and nurture a connection with music of all kinds. Genny sings with the Schola Cantorum at the Cathedral of St. Joseph in Hartford, CT and is an active performer and recitalist around the Hartford area.

Soprano Kathryn Bowden is making her mark in the fiendish role of the Queen of the Night (Königin der Nacht) in Mozart’s Die Zauberflöte, for which she has become highly in demand. In October 2017 Ms. Bowden made her Metropolitan Opera debut as the Queen in the company’s German language mainstage production and covered the role during the Met’s English language family performances later in the season. She also made her 2017 Baltimore Symphony Orchestra debut performing the Queen’s famous “Der Hölle Rache” in the concert program Heroes and Villains. The role of the Queen has served as Ms. Bowden’s 2015 San Francisco Opera debut vehicle and her entry onto the Metropolitan Opera roster as cover for the 2016 family performances of The Magic Flute. She looks forward to reprising it for her San Diego Opera debut in April 2021.

In 2018 Ms. Bowden made her debut with Houston’s Opera in the Heights as Cunegonde in Candide. Additional roles include Drusilla (L’incoronazione di Poppea), the Coloratura (Postcard from Morocco), Anne Trulove (The Rake’s Progress), and Greta Fiorentino (Street Scene).

An alumna of San Francisco Opera’s prestigious Merola Opera Program, Ms. Bowden performed the roles of Mrs. Gobineau (The Medium) and Nella (Gianni Schicchi) and excerpts from the role of Amina (La sonnambula). She has also participated in the voice program of the Chautauqua Music Festival.

Ms. Bowden has been a District Winner of the 2016 and 2014 Metropolitan Opera National Council Auditions in Florida and Winner of the 2013 Jenny Lind Competition for Sopranos. She earned her Performer’s Certificate and Bachelor of Music in Vocal Performance from the University of Connecticut, and is a current Masters candidate at Florida State University.

Peter Skaar holds a Masters of Music from the Hartt School of Music and a Bachelors in Music Performance from Shenandoah Conservatory. Peter is also graduate of the Dreyfoos school of the Arts. Starting piano at age 7 and later cello at age 11 Mr. Skaar has over 18 years of musical experiences. His major Teachers include Terry King Professor of cello at the hartt school and Longy school of music, Clyde Thomas Shaw Retired Professor of Cello at Shenandoah Conservatory and member of the former Audubon String Quartet, as well as David Cole Cello Professor at Lynn Conservatory.

As a teacher Peter has experience working with all ages and levels of player. He believes that each student’s needs are unique and that with enough dedication anyone can become a musician. “There are only two rules I have in my lessons. A student needs to learn something and the student should have fun during learning.”

Anna has taught voice and piano at Summit since 2017, and is currently teaching lessons online. She studied piano privately for 10 years, and began studying voice in high school. She graduated with honors from the University of Hartford’s Hartt School in December 2017, where she completed a double major in vocal performance and music education.

While at Hartt, Anna was an active member of Hartt Opera Theatre and Hartt’s choral department, serving the Chamber Choir as section leader for two years. While living in the greater Hartford area, she sang with the Schola Cantorum at the Cathedral of Saint Joseph and with Voce, Inc. Anna is currently a student at the University of Iowa, where she is pursuing a master’s degree in speech-language pathology. 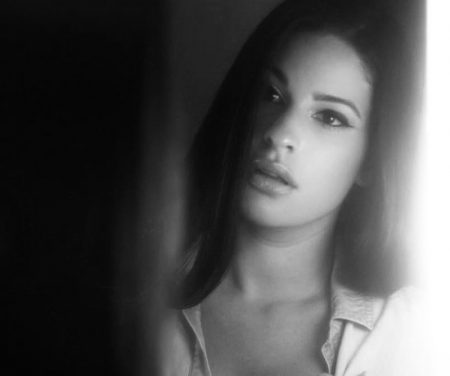 Dana Lauren is a vocalist/pianist with a Bachelors Degree from Berklee College of Music. She is also an alumni of the New England Conservatory of Music. Dana has toured and recorded with legendary Grammy Award winning trumpeter Arturo Sandoval, singing at some of the nations most famed jazz venues. Her 2008 album release “Stairway to the Stars”(featuring and produced by Sandoval), hit the top of the jazz charts and received rave reviews from some of the most prestigious jazz publications in the country. Her second album release in 2010 “It’s You or No One”, was self produced and features Christian McBride on bass. That same year, Dana was selected as a semi-finalist in the Thelonious Monk International Jazz Vocal Competition.

She is an accomplished classical pianist and has extensive experience in private vocal and piano instruction. Through her formal education and performance experience, Dana has developed into a versatile teaching artist with experience coaching across various genres of music including jazz, classical, musical theater and pop. She also works with students on composition and music business strategies.

Dana is currently signed to Sapphire Records and is working on an EP of original music. 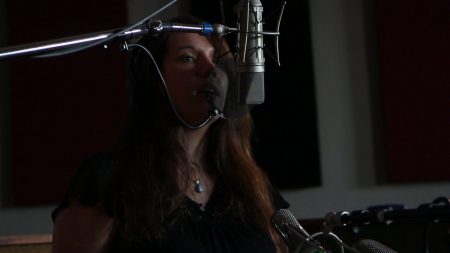 Kelly English is a singer/songwriter from Bolton, Connecticut, and a Summit alumnus! A finalist in the 2015 NewSong Songwriting Contest, North America’s premier performance and songwriting competition, Kelly traveled to Asheville to compete at the Lake Eden Arts Festival. She also took home 1st place at the Eventide Songwriting Contest, of which Meghan Trainor is a past winner. Kelly graduated from Berklee College of Music where she earned a Bachelor’s Degree of Music in Music Business and Songwriting. As a performer, Kelly has been playing solo acoustic music across New England. She has opened for acts including Among the Acres, NewSong Contest winner Rachael Kilgour, Grammy-award winning member of “In Living Colour” Corey Glover, and many others. Kelly is a brand new instructor, with more than 10 years of songwriting experience and a lifelong love of writing lyrics.   Her debut album “City Limits” came out on October 6, 2017, mixed and produced by Gar Ragland (Newsong Recordings, Citizen Vinyl). Kelly’s sophomore EP, “The Savannah Theory”, comes out in 2020.
Dina DiMarco (Voice + Piano) 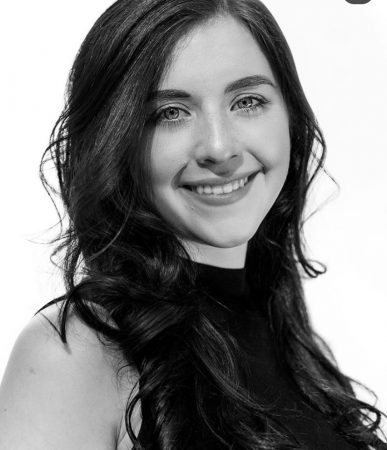 Dina DiMarco is Connecticut based vocalist specializing in jazz and improvisation. She graduated Magna Cum Laude with a Bachelor of Arts in Music from Western Connecticut State University in 2020 with a focus in Jazz Voice as well as a minor in Theatre Arts. She studied under Atla DeChamplain throughout her time at the University and had the opportunity to briefly study classical voice under Constance Chase. During her time at Western she performed in multiple jazz combos and had the opportunity to play with Geoff Keezer and open for Robert Glasper. While attending school she also had the opportunity to be mentored in an organization outside the university “Women in Jazz Organization” or WIJO. In this program she studied under Rachel Eckroth in voice and piano. Outside of jazz, she was involved in multiple theater productions as a performer and a musician. She accompanied the production of Peter and The Starcatcher and played synthesizer on The 25th Annual Putnam County Spelling Bee and performed in UBU: A Grand Guignol Musical. She competed in The National Association of Teachers of Singing competition and was awarded 3rd place in the Musical Theater Category in 2018.

Now graduated, Dina is a regular performer in the Hartford and Danbury Areas. Specializing in jazz, her acoustic duo with guitarist Mike Gaboardi plays private events, weddings, vineyards, and local restaurants as well. She also freelances and performs with larger groups or bands given the opportunity. She is a recording artist as well, debuting in 2020 with her group’s holiday EP “Swingin’ on a Sleigh” which can be listened to on all popular streaming services.

Dina is passionate about not only providing a strong musical foundation for her students, but to help them create a relationship with music that will motivate them to learn, explore their creativity, and express themselves in a healthy, fulfilling way. Dina hopes to later pursue this journey by getting her Master’s in Music Therapy and wishes to work with children and teens of all abilities. 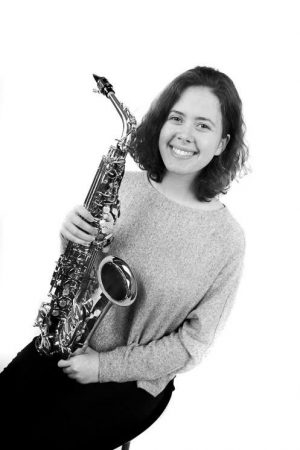 Malin Carta is a recent graduate of Western Connecticut State University in Danbury, CT. Born and raised in Hartford County, she received a B.M. degree in jazz performance and studied under the direction of Grammy-nominated saxophonist Dr. Jimmy Greene. Malin is well-versed in both classical and jazz music. She was classically trained throughout high school and during her first year of college when she won the James Furman Memorial Award for the freshmen class. Malin has played in jazz and classical-based ensembles and held the position as president of WCSU’s Jazz Club. Malin has shared the stage with guest artists such as Sean Jones, Russell Malone, Josh Evans, Geoffrey Keezer, and Ron Carter. For four semesters Malin played lead alto in the WCSU Jazz Orchestra, first chair alto saxophone in WestConn’s Wind Ensemble, and soprano saxophone in her saxophone quarteMalin now performs throughout the CT, NY, and MA area with various groups including her own quartet.   Aside from performing, Malin loves to teach. She teaches privately throughout CT on saxophone, clarinet, flute, and piano. Malin has experience teaching all ages, ranging from infants to adults.