Peter Skaar holds a Masters of Music from the Hartt School of Music and a Bachelors in Music Performance from Shenandoah Conservatory. Peter is also a graduate of the Dreyfoos School of the Arts. Starting piano at age 7 and later cello at age 11 Mr. Skaar has over 18 years of musical experience. His major teachers include Terry King Professor of cello at the Hartt School and Longy school of music, Clyde Thomas Shaw Retired Professor of Cello at Shenandoah Conservatory and member of the former Audubon String Quartet, as well as David Cole Cello Professor at Lynn Conservatory.

As a teacher, Peter has experience working with all ages and levels of player. He believes that each student’s needs are unique and that with enough dedication anyone can become a musician. “There are only two rules I have in my lessons. A student needs to learn something and the student should have fun during learning.”

In competition, Julie has won the 2014 Bradley University concerto competition and has been selected as a finalist in the Delta Symphony Orchestra Concerto Competition in both 2016 and 2017. In March 2017, her Piano Trio was awarded third prize in the annual Hartt School Chamber Music Competition in Hartford, Connecticut. In April 2018, she was the featured alumni soloist with the Kankakee Valley Youth Symphony Orchestra, of which she participated in throughout high school. In addition to competitions and solo appearances, she has attended the Arianna Chamber Music Festival in St. Louis, Missouri and ARIA International Summer Academy in Massachusetts. Julie received her Bachelors of Music in Violin Performance in 2016 from Bradley University and studied violin with Marcia Henry Liebenow and her Masters of Music in Violin Performance in May 2018 at The Hartt School under the study of Anton Miller. In the fall, she will be continuing her studies at The Hartt School to pursue her Doctor of Musical Arts degree. 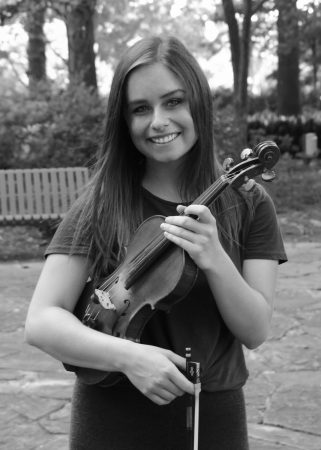 Kelly Gembara began playing violin at the age of 9. She has performed with Columbus Symphony Youth Orchestras, the Westerville Symphony, New Britain Symphony, and Opera Project Columbus. Throughout the last two years of high school, Kelly was a member of a competitive ensemble named the Geneva String Quartet that won awards in the Coltman Chamber Music Competition, Saint Paul String Quartet Competition, and the Fischoff National Chamber Music Competition. She has played and performed in masterclasses hosted by the Calidore, Cavani, Dover, Brentano, St. Lawrence, Haussman, and Quartet ES string quartets.  Kelly traveled to Switzerland in 2017 with her high school quartet and members of the Chamber Music Connection.  She regularly performs in the New England area for musical theatre productions, orchestras, and other various gigs. Kelly currently studies with Anton Miller at The Hartt School of Music.